In the course of his career Gerrit Zitterbart has managed to distinguish himself equally both as soloist and as chamber musician in more than 3.500 concerts worldwide.. His repertoire includes compositions from Scarlatti and Bach to Stockhausen and Rihm and is comprehensively represented on more than 70 CD; his recording of early piano concertos by Mozart was awarded the »Choc« in France (Le Monde De La Musique).

In 1976 Gerrit Zitterbart founded the Abegg Trio together with Ulrich Beetz and Birgit Erichson. The Trio has received important awards (Colmar, Geneva, Bonn, Bordeaux, Hanover, Zwickau), has undertaken worldwide tours with more than 1.250 concerts in 50 countries and has recorded 30 CDs, including the complete works for this instrumental combination by Mozart, Beethoven, Schubert, Mendelssohn, Gade, Schumann, Brahms, Dvorák and Schostakowitsch. Five times the Trio's recordings have been awarded the much-coveted German Record Critics' Prize. 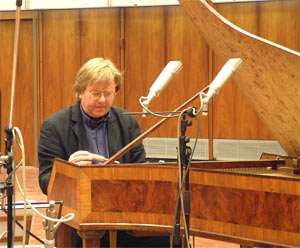 Gerrit Zitterbart feels a particular affection for historical keyboard instruments; since 2003 he had also been giving concerts on the fortepiano. Not only does he make use of these instruments for solo concerts, but he also employs them to give a fresh impetus to chamber music: the Abegg Trio has made CD recordings with fortepianos built by Silbermann and Baptist Streicher, and several CDs with Heidrun Blase, soprano, Matthias Metzger, violin, and Denise Wambsganß, mandolin, present the music in a new  light. Enthusiasm for the historical fortepiano has led to the founding of the Society "Clavier e.V." , the aim of which is to make musicians and audiences more aware of these sounds.

One important facet of Gerrit Zitterbart's repertoire are his children's concerts. The concerts are presented by a moderator and the children are integrated into the events on the stage. This is the way to win tomorrow's audience for classical music. CD productions provide documentation of these programmes tailor-made for children.

Joachim Kaiser wrote in the Süddeutschen Zeitung: "A first-class musical personality: the pianist Gerrit Zitterbart, who with his clever, precise and perceptive style of playing presented enthralling recordings of the Beethoven solo sonatas."

In addition to his concert activities Gerrit Zitterbart has also been in charge of a piano class at the Hanover Academy of Music and Theatre since 1981, teaching young, talented musicians from Germany, Denmark, Poland, Lithuania, Romania, Bulgaria, Russia, Georgia, Israel, Japan, Korea, China, Canada and the USA.

Mozart: Concertos C major K 246, B flat major K 238, E flat major K 271
Gerrit Zitterbart is a splendid Mozart pianist. His tempos sparkle, his phrasing is crisp, and his touch (especially in slow movements) is caressing and sensitive but not precious. His Mozart is alive. It breathes. It also sings. This is Mozart playing of real character and individuality.
American record guide

As with his splendid Hänssler release devoted to Haydn keyboard concertos, pianist Gerrit Zitterbart again applies his stylish sensitivity to a trio of early Mozart concertos. The performances easily rank with the finest recordings of these works now available. Although Zitterbart plays on a top-of-the-line Bösendorfer Imperial Grand, he takes subtle advantage of his instrument's plangent, unhomogenized timbres that suggest a fortepiano's registral differentiation. In turn, Thomas Fey's Schlierbacher Kammerorchester proves that the gaunt and tart sonorities characterizing period instrument ensembles can be achieved with arguably more flexible results on modern instruments, although Fey uses natural horns instead of their stabler modern counterparts. The conductor, to be certain, doesn't entirely avoid those self-conscious dynamic swells that are as mannered today as string portamentos were in the late 19th century, yet he doesn't make a habit of them. More importantly, you sense that conductor and pianist are perpetually engaged in playful dialogue, responding to each other's phrases as a pair of old friends might pick up each other's sentences in midair. There's just enough ornamentation to keep the listener on guard (catch Zitterbart's cute little turns at the outset of the E-flat concerto's Rondo theme), but never more than necessary. You never can get enough Mozart from vibrant, caring musicians like these; is more on the way?
Jed Distler · Classics today (USA) 2002

This is, not to beat about the bush, a thriller. It marks, as the French would say, »a date« in the history of Mozart piano-concerto recordings. Gerrit Zitterbart has already made two Hänssler discs of earlier ones. I reviewed the first, cannily coupling the three concertos of K 107 with the Christian Bach sonatas they were arranged from, with enthusiasm in 20:5; the second, comprising the four still earlier K 37, 39, 40, and 41, seems unaccountably to have passed me and Fanfare by. But the new release is the first to tackle Mozart concertos of genuinely original status and relative maturity, and as such it establishes a new standard for recordings of this inexhaustible treasure house of music.
As it happens, Zitterbart, a German pianist now in his late forties, has recorded K 246 before. It was that version, a live 1990 performance coupled with K 595 on the Gutingi label, that led me to engage him to play a Mozart concerto with the Residentie Orkest in the Hague when I was that ensemble's artistic director in the mid 1990s, with results that I think delighted everybody. The performance he has now put on disc for Hänssler marks, nevertheless, a notable advance in Zitterbart's achievement. It benefits from slightly faster tempos in the outer movements and a distinctly more fluent pulse in the Andante, and it also benefits from the orchestral contribution of the Schlierbach Kammerorchester under Thomas Fey. Together these musicians seem to me to have done for these still fairly early Mozart works something akin to what Leif Ove Andsnes on a spectacular EMI disc did for a group of Haydn piano concertos a year or so ago. That is to say, there is a sheer zest about these performances that, without falsifying the music, makes it sound more valuable and downright exciting than I have ever heard it sound before. Who would have thought. as Lady Macbeth might have asked, that these pieces had so much blood in them?
I had better warn readers that some may find the orchestral element in these performances brutal. With a modest string complement of 4-4-2-2-1 and using (with the exception of the natural horns) modern instruments, but adopting a rigorously selective practice in the matter of vibrato, Fey draws bold and startling sonorities from his orchestra. In my judgement, the bracing tone never goes beyond the bounds of appropriate style or attractive music-making. Fey shows that modern instruments, played with an awareness of historical-performance practice, can provide the best of both worlds, partly because the dynamic contrasts they make possible go beyond what most period-instrument performers are able to achieve. Zitterbart's Bösendorfer Imperial sounds wonderfully limpid in tone. Soloist and conductor alike have an unerring instinct for the rethoric of these pieces. Accents are strong, not to say tigerish, again without transferring us into an inappropriately Romantic sound world. The powerfully delineated bass that is a feature of the recorded sound produced by Andreas Spreer is another positive factor in the success of the whole, as is the soloist's well-judged use of melodic embellishment at all the right moments.
These are performances that had me smiling, chuckling even, at their rightness of conception and skill of execution. If only Hänssler had given the great Ivan Moravec a conductor like this, instead of the eminent but humdrum Neville Marriner, for the two discs of Mozart concertos they made with him in recent years! The loss is Moravec's, and ours too. But Zitterbart is so good that he deserves his place in this project, and I hope it will continue with some of the later concertos. That, as the awesomely dramatic yet irresistibly sprightly performance of K 271 that concludes the present program intimates, will indeed be something to hear. Meanwhile I urge you not to miss this revelatory disc.
Bernard Jacobson · Fanfare (USA) May/June 2001

This is an extraordinarily pleasing disc, containing the oft-performed Concerto in E-flat K 271, as well as two concertos written a year before, in 1776. Without excessive emphasis, with a beautifully rounded tone and expressive tact, Zitterbart makes as good an argument for the two earlier works as I have heard. Some might find the playing understated. I don't find it so. Zitterbart and the Schlierbacher Kammerorchester are in perfect balance throughout: They seem to be collaborating rather than conversing. Zitterbart, who has recorded even earlier Mozart concertos, uses a modest amount of rubato in his solo passages, and accents in a lively fashion. The orchestra follows his most intimate gestures perfectly. I don't know any obviously preferable recordings of these pieces. Zitterbart and Fey take the same approach to the more dramatic K 271, emphasizing its lyrical flow, its songfulness and good cheer. That means that there are more dramatic recordings around. Still, it is easy to recommend this performance. The wonderfully warm and realistic recorded sound helps.
Michael Ullman · Fanfare (USA) July/August 2001

Haydn: Concertos F major, G major, D major
Concerto No.4 (F major), Concerto No.5 (G major): The finest performance is by Gerrit Zitterbart (piano) with the Schlierbach Chamber Orchestra led by Thomas Fey; it's a supple and expressive reading with wit and drama. Ax is stronger than Alpenheim but less imaginative than Zitterbart.
Concerto No. 6 (D major): Not only are the reliable Alpenheim, the decent Rosel, and the eloquent Gerrit Zitterhart in the running, but also such heavyweights as Argerich and Kissin. There are also piano versions from Ax, Helen Chang, and Davidovich. None is negligible, but of the piano versions Zitterbart wears the best.
American record guide

Mozart: Concertos K 107, 1-3
The 8-year-old Mozart met J.C. Bach in London, heard and played his sonatas, and eight years later adapted three as the concertos (K. 107). These early concertos show both homage and independence. Mozart arranged the piano writing to combine with a very small orchestra, yet the piano writing became distinctly Mozart's. Where J.C. Bach's writing was formal and reasonable, its lucidity emphasized by the lyrical style, Mozart's leapt with energy and extraordinary turn of phrase.
These early concertos rarely reach the concert stage now. They have been overshadowed by the ones Mozart wrote afterward, but they remain extraordinary pieces, full of exploration, lyricism and invention. Pianist Gerrit Zitterbart plays them on a Bösendorfer, showing that music conceived in the earliest days of the piano carries its eloquence forward even through the largest instrument. The string players, however, use period instruments, creating a musical free-for-all that has the weight of conductor Thomas Fey's own convictions.
The Bach sonatas that inspired Mozart's concertos follow on the disc. Zitterbart finds the lyrical key to the music while clarifying form and harmony. J.C. Bach's musical vision and gift for the succinct statement are made clear in these performances.
The News-Times 2001

Joseph Haydn (as well with fortepiano)

Felix Mendelssohn-Bartholdy (as well with fortepiano)

Concerto for violin, piano and strings